Jusuf Kalla Received Award in the Field of Peace

Jusuf Kalla Received Award in the Field of Peace 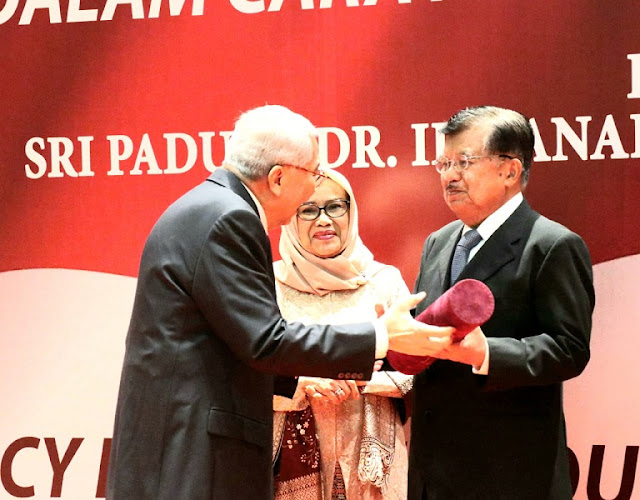 The awarding of the Award was because Jusuf Kalla was considered superior in terms of negotiating in the field of peace, both domestically and abroad. This was stated by Mrs. Meutia Hatta as the head of the jury.

According to him, the National Hero Award Dr. Ide Anak Agung Gde Agung was given to individuals or figures who were considered to have contributed to the implementation of Indonesian diplomacy.

This year, the recipient of the award is Dr. (H.C.) Drs. H. Muhammad Jusuf Kalla.

"This award has been going on for a long time and this year Jusuf Kalla through the selection of the jury has been chosen as the recipient of the National Hero Award Dr. Ide of ??Anak Agung Gde Agung, "said Meutia Hatta.

The assessment is due to the role of Jusuf Kalla who always maintains peace and peace in Indonesia. Jusuf Kalla has always been a negotiator in problems or conflicts in other countries.

On that occasion, Jusuf Kalla expressed his gratitude for awarding him. He said, in negotiating to resolve a conflict, one must understand the problem of the characteristics of both parties and no one party could lose face.

"In addition, we must also be brave and firm in order to be respected," JK said.

He pointed out that one of the conflicts he had resolved was Aceh. In the Aceh peace process, he said, many read books about Aceh to find out the culture of Acehnese people, so that it was easily resolved.